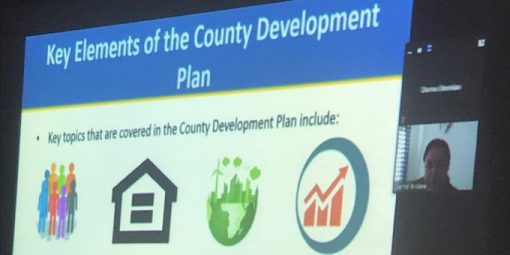 LOCAL geography has come to life for second years at Scariff Community College, where students are making a submission to a review of the County Development Plan.

Under the guidance of teacher Darina Sheridan and with support from Carmel Brislane, a planner with the council, the students are making their voices heard on the future of the school’s catchment area of Scariff, Mountshannon and Whitegate.

Geography teacher Darina sees the call for submissions to the plan, which will cover 2022-2028, as an opportunity for some real-world learning. “I had looked that the plan previously with a Transition Year (TY) group and realised that there was potential here for the students to look at their own areas and to get to know then and what kind of amenities they would like to see,” she explained. Working with Clare County Council, Darina began to develop practical exercises built around the submission.

“We have had Zoom calls with Carmel, which were great,” she explained. “Carmel also provided us with material for worksheets and maps. Group work has been curtailed by the pandemic, so the worksheets compensate for that, to some extent.

“Working on a submission to the development plan something that’s really tangible for the students. It’s great that they are getting to have a say and it’s good for them.”

The project, which is clearly getting a very positive response from the students, is described by Darina as “real-life geography”. “We’re working with a theme of vision and identity and that students are looking at their own areas to figure out how outsiders might see it,” she outlined.

The planning section of the council currently has 30 national schools and four secondary schools participating in similar practical geography projects, which will culminate in submissions to the plan.

“There’s a two-year statutory review of the plan under way,” Carmel explained. “It is really important for us to consult young people because it is their plan. Darina and Scariff Community School have been absolutely fantastic and really embraced the project. We’re getting great input and vision. We’ll have a draft plan by August of next year. That will go out to consultation and the kids will get the chance to review it.”

The response from students has been very positive and there’s no shortage of ideas on improving their localities.

Fourteen year-old Michael Heffernan said that making the submission to the plan as part of second year Geography is enjoyable and educational. “We are looking at what’s needed in the areas we live in,” he said. “For me, that’s Whitegate. We do need more bins in the area, so that’s one thing that should be looked at.”

Harry Bogenberger, also 14, said that a footpath between Whitegate and Mountshannon is one thing the community would benefit from. “It would be great, because there are a lot of bad bends on that road,” he said. “A path would make things safer. A playground for the younger children would also be a good addition.”

Leah Van Kampen (14) added that it is great to see the council addressing the issue of climate change. “It’s really important that climate change is referred in the plan,” she said. “There is a lot to be done from that perspective, and this generation is very involved in raising awareness.” Leah agrees that a playground for younger children would be a welcome amenity in the area and said that a venue for teenager, potentially the old cinema in Scariff, would be something she would like to see.

Scariff resident Rhianna Keane (14) also believes that more facilities for teens and young adults are needed in the area. “A lot of young people only have the streets as a place to meet,” she said. “More youth facilities are definitely needed. There were a lot of things going on at Scariff Library before the pandemic.”

The deadline for public submissions to the County Development Plan is 4pm on next Monday, November 16, with full details on clarecoco.ie.